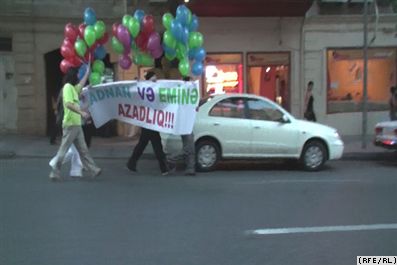 Yesterday, 20 August, an action was conducted to protest the arrest of “Alumni Network” Youth Organization Coordinator, ANTV Online TV Leader Emin Milli and one of “OL” Youth Organization’s coordinators, well-known video-blogger Adnan Hajizade. The Institute for Reporters’ Freedom and Safety was told this by Youth Rights Defense Committee coordinator Erkin Gadirli.
“The young activists advanced in “Istiglaliyyat” street holding slogans ‘Freedom for Adnan and Emin’ that was fastened to more than a hundred balloons,” said E.Gadirli.  “When police wanted to rip the slogans, they released the balloons up in the air around Nizami monument, and thus the action was possible to hold.”

E.Qadirli told the Institute for Reporters Freedom and Safety that German Bundestag Deputy Yorg Tauss addressed an appeal to the president of Azerbaijan Republic I.Aliyev. Concern regarding the arrest of young adults in Germany and other European countries has been expressed in the appeal, and the president was asked to grant permission to Y.Tauss to visit young bloggers during the deputy’s visit to Baku.

According to “Turan” Information Agency, on 28 August an action will be held by American-Azerbaijan organization in front of Azerbaijan’s embassy to the US.

On 8 July, at approximately 8:00 p.m., Emin Milli and Adnan Hajizade were sitting at a table in “Lebonese” (Livan) restaurant along with several other young adults, when two people that looked like sportsmen came up to them, and attacked them causing physical injuries. Although they appealed to police as victims, police detained Adnan and Emin as suspected persons for 48 hours and freed the attackers. On 10 July, Sabail District Court Judge Rauf Ahmadov issued a decision under article 221.2.1 (hooliganism) of the Criminal Code to sentence Emin Milli and Adnan Hajizade to two months pre-trial detention. On July 20 the Appellate Court upheld the decision of the lower court. Both Emin Milli and Adnan Hajizade are being held in the Investigative Prison of Baku.