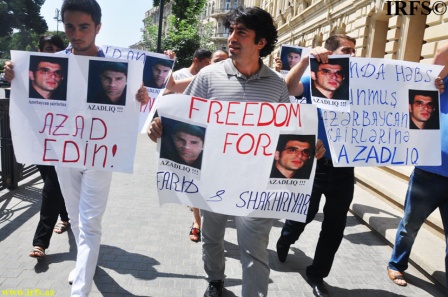 Dozens of journalists have taken part in a peaceful protest in front of the Iranian embassy in Baku, demanding the release of the two Azerbaijani writers arrested in Iran.
The event was held at the initiative of the Institute for Reporters Freedom and Safety, with the participation of members of the mass media.

Authorities had not sanctioned the rally, although the organizers had submitted appropriate notice. Police stopped the protesters far away from the embassy, grabbed and tore their posters. The protesters read out the resolution of the protest and submitted it to the embassy. The document said that young Azerbaijani writers Farid Huseyn and Shahriyar Hajizade arrested in Iran are the victims of political tensions between Baku and Tehran. In a similar situation are the Iranian mass media correspondents arrested in Azerbaijan.

"We urge the Iranian authorities to respect the right to freedom of expression and to release Azerbaijani writers, who did not violate the laws and were arrested on trumped-up charges of violating the rules of crossing the border," the document says.

The writers were arrested on May 2nd in Tabriz, on their way from Tehran to Baku. They will appear before the court on August 7th in Tabriz. The Azerbaijani government has sent five protest notes to the Iranian Foreign Ministry demanding the release of the writers, but only a week ago, Iranian authorities allowed an employee of the Azerbaijani consulate in Tabriz to visit the prisoners.

IRFS calls for justice in murders of journalists