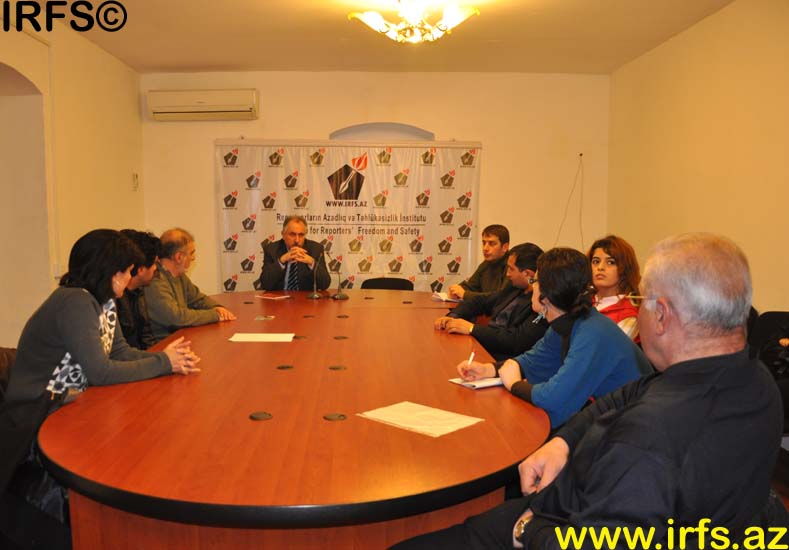 Today, 4 March, in the press center of the Institute for Reporters` Freedom and Safety, within the framework of ten day events for Elmar Huseynov, a round table was conducted with the participation of families and lawyers of imprisoned journalists. Turan Information Agency Director Mehman Aliyev gave information about imprisoned journalists. He pointed out that the journalists targeted by the government are arrested under different pretexts and they continue to face new provocations against them. As an example, he mentioned the appeal addressed by Gundelik Azerbaijan and Realniy Azerbaijan newspapers’ editor-in-chief Eynulla Fatullayev regarding danger to his life.
Eynulla Fatullayev`s father Emin Fatullayev said that the last time he met with his son was on 21 December, 2009.

“An appeal was filed in court to supersede the remainder of his prison term with lighter punishment; however, this lawsuit was not fulfilled,” said Ayanda Mursaliyeva. “They said that Ganimat Zahid did not join a volleyball competition and violated regulations. But the woman who confronted Ganimat Zahid in court was arrested, and the judge was dismissed from work. These events prove that Ganimat is innocent.”

Imprisoned blogger Adnan Hajizade`s father Hikmat Hajizade said that the bloggers do not have any complaints regarding prison conditions. “I express my gratitude to media representatives, human rights organizations, and international organizations for their support for Adnan Hajizade and Emin Milli,” said H.Hajizade. “I believe that everything will be fine.” Hajizade added that they will not appeal for a pardon. “What should I write in the pardon appeal? Should I write that my son will never beat sportsmen?”

There are currently four imprisoned journalists in Azerbaijan. They are recognized as prisoners of conscience by local and international organizations.

Eynulla Fatullayev was sentenced to 2.5 years of imprisonment on 21 April 2007 for insulting honor and dignity.  Later he was convicted under articles 214.1 (threatening terror), 283.2.2 (incitement of ethnic/national, social or religious hatred abusing authority), and 213.2.2 (tax evasion) of the Criminal Code and was sentenced to 8.5 years of imprisonment on 30 October 2007. Prior to the new charge against him, Fatullayev was serving his sentence in prison #12. On 29 December, 0.223 grams heroin was found on Fatullayev. Eynulla Fatullayev and his lawyer assess this incident as an operation set-up to prevent the decision of the European Court of Human Rights (ECHR) regarding the journalist in the near future. A criminal case was opened against Fatullayev in the Garadag District Investigative Department under article 234.1 of the Criminal Code (Illegal purchase or storage without a purpose of selling of narcotics or psychotropic substances in a quantity (amount) exceeding necessary for personal consumption) and he was transferred to the Baku Investigative Prison #2 on 2 January.

Ganimat Zahid was convicted under articles 127.2.3 (hooliganism with intentional infliction of minor bodily harm) and 221 (hooliganism) of the Criminal Code and imprisoned for four years.

On 8 July, at approximately 8:00 p.m., Emin Milli and Adnan Hajizade were sitting at a table in “Lebonese”  (Livan) restaurant along with several other young adults, when two people that looked like sportsmen came up to them, and attacked them causing physical injuries. Although they appealed to police as victims, police detained Adnan and Emin as suspected persons for 48 hours and freed the attackers. On 10 July, the Sabail District Court issued a decision under article 221.2.1 (hooliganism) of the Criminal Code to sentence Emin Milli and Adnan Hajizade to two months pre-trial detention. On July 20 the Appellate Court upheld the decision of the lower court. The investigation of the criminal case was concluded and a criminal case under articles 221.2.1 (hooliganism) and 127 (inflicting intentional minor bodily harm) was opened against E.Millli and A.Hajizade and the case had been sent to court to be considered. According to the verdict of Sabail district Court, Emin Milli was sentenced to 2,5 years imprisonment and Adnan Hajizade to 2 years imprisonment on 11 November.