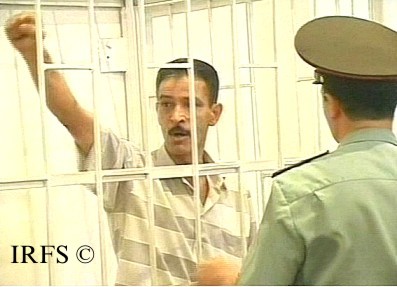 “Sakit (ed. Zahidov) will start a hunger-strike tomorrow. He informed the prison’s administration about this through official petition and a special room has been arranged for him.
Sakit noted that he’ll start the hunger-strike early in the morning.” Imprisoned Azadlig Newspaper Journalist/Satiric Samit Zahidov’s wife Rena Zahidova told this to the Institute for Reporters’ Freedom and Safety. Zahidova visited Sakit today in prison and her husband conveyed to her several demands. According to Zahidova, the imprisoned journalist demands that he be transferred to one of the inner-city prisons, that Press Council Aflatun Amashov resign, that a meeting with the Ombudsman in the Prison 14# be arranged and that Justice Ministry Penitentiary service chairman Nazim Alakbarov to respond his appeals. According to Zahidov, though he appealed to Alakbarov to be transferred to an inner-city prison three times, he has gotten no response. “Sakit has already filed a lawsuit against Nazim Alakbarov,” said Rena Zahidova.
Zahidova also told IRFS that Sakit’s health is very poor. “I have never seen Sakit in such poor condition during his imprisonment period. He has lost too much weight, his right leg has become emaciated and he suffers from chest pain.” While talking with Zahidova, Zahidov noted that there has been no water at the prison facility for 20 days due to below freezing temperatures.
Previous Post