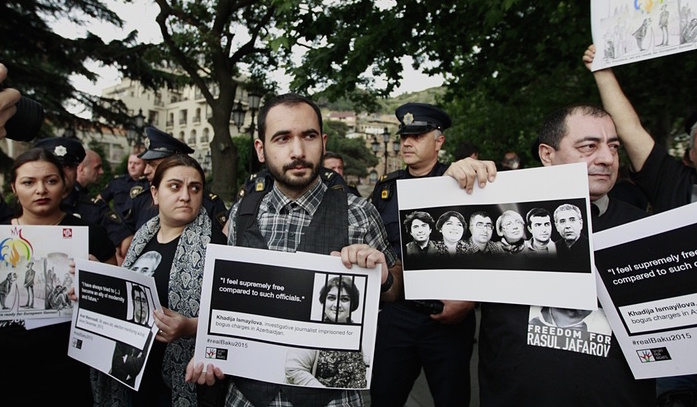 Having secured a parliamentary majority through yet another fraudulent election, the government has not reined in its attack on fundamental human rights. On the contrary, the crackdown has intensified. Officials are subjecting members of religious groups to physical pressure and arresting them on false charges, putting pressure on human rights defender Leyla Yunus in prison, and failing to provide conditions for fair trials.

Following the elections, religious believers – namely Muslims – have been the primary target of government repressions. The President’s declaration that “Azerbaijan is moving along the path of democracy, and all freedoms, including freedom of speech, press freedom, freedom of assembly, freedom of conscience and religion, and freedom of political activity are guaranteed without any restriction,” is undermined by the realities of religious oppression. Theologian and former political prisoner Tale Bagirzade, Chairman of the Muslim Union Movement, was called to the police office and subjected to physical pressure and threats. Just two days after that, the deputy chairman of the organization, Elchin Gasimov, was detained. A group of Muslims protesting against his detention faced police pressure, and 9 or 10 of them were subsequently charged with resisting police officers. They were sentenced to various terms of administrative imprisonment, up to 30 days. Local experts and opposition forces have called this crackdown a “post-election show for Europe”.

Of course, human rights defenders were not spared; Leyla Yunus, who has been in jail for over a year on trumped-up charges was assaulted in jail. The bruises on her neck were visible during her appeal hearing.

Ilham Aliyev: “Everything in life must be based on justice.  Violation of justice can, of course, lead to discontent and difficulties for the positive development of the society. Fair decisions increase people’s trust in the government and also regulate our life.” However, like other declarations by the president, these are empty promises. During the appeal hearings for human rights defenders Arif Yunus and Leyla Yunus in Baku Court of Appeal, the right to a fair trial – as guaranteed under domestic and international law – was grossly violated. Defence motions were arbitrarily rejected; the defendants were prohibited from making speeches; and their ability to hear procedures was limited.

Journalist Rauf Mirgadirov, arrested on false charges, will be tried in a closed hearing, according to a court decision.

The investigation of the murder of IRFS chairman and journalist Rasim Aliyev is a whitewash; the motions of the late journalist’s lawyer are repeatedly rejected, and the expert opinion was issued as late as 3 months after Aliyev’s death. The opinion states that the doctors are not culpable, but a source from the hospital revealed that Rasim Aliyev died because of an incorrectly administered anesthetic prior to surgery, i.e. surgery began without effective anesthetization.

Prior to the release of the opinion, many believed that there was little hope for a fair decision. The forensic examination center is a subordinate body of the Ministry of Health; admitting medical malpractice would be devastating for the Ministry of Health, which already facing serious public criticism.

During this period of economic hardship in Azerbaijan, the president’s emotionally charged speeches fail to reflect the realities on the ground. The government is now openly demonstrating that it is not interested in pursuing a democratic path, and feels no obligation to guarantee human rights, which are systematically and repeatedly violated.