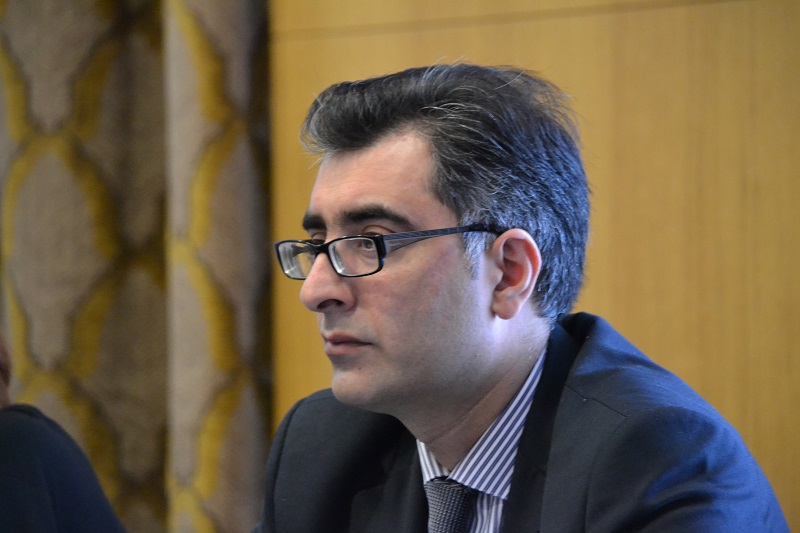 Still in jail, Anar Mammadli did not participate in the hearing. The hearing was attended by the public prosecutor and only one of the three lawyers of the defendants, Elchin Sadigov. The other two defence lawyers, Alibaba Rzayev and Fariz Namazli, missed this hearing, as they were attending other court proceedings. Lawyer Elchin Sadigov defended the cassation appeal at the hearing.

Based on the following, an appeal has been filed with the request to rescind the Baku Court of Grave Crime’s verdict of 26 May 2014 as unlawful and groundless, and to acquit Anar Mammadli, Bashir Suleymanli and Elnur Mammadov, but the appellate proceedings were held without a judicial investigation and without the introduction of additional evidence, and by the decision of 10 December 2014 of the Baku Court of Appeals, the appellate complaint was not granted and the Baku Court of Grave Crimes’ verdict of 26 May 2014 was upheld.

The Baku Court of Grave Crimes’ verdict of 26 May 2014 is totally incompatible with the evidence examined during the trial. As such, during the court proceedings, all the “victims” except Hasanov, Hasan Saladdin oglu noted that they had had all accounting documents themselves, received their fees for the provided services in full and compiled and signed the relevant strict reporting forms. During the court proceedings, the victims were shown signatures and they once again stated that those signatures belonged to them. The “victims” stated that they did not confirm their investigation statements, because they had given those statements under pressure from the investigating agency. Despite the arguments about the distortion of the witnesses’ and the “victims”’ testimonies in the verdict, the court minutes and the relevant notes made in the court minutes, the Court of Appeals did not question the witnesses and “victims” again, and unreasonably copied the investigation statements provided under duress from the indictment bill to the verdict.

It is evident from the criminal case materials that the general prosecutor of our country went online just one day after an important event in the Republic of Azerbaijan, i.e. the presidential election, and came across a lawyer vacancy published by the EMDS. He printed the vacancy advertisement, underlined the job salary and tasked his deputy, Mr. Rustam Usubov, with investigating this issue. Mr. Usubov saw that offering a 500 AZN salary for a lawyer vacancy was a serious crime and it fell within the competence of not him but Eldar Ahmadov, the head of the Serious Crimes Investigation Department. So, he sent the vacancy advertisement printed from the internet by the prosecutor general to Mr. Eldar Ahmadov, who, in turn, referred it to investigator Vugar Nasibov for investigation of this serious crime. Vugar Nasibov adopted the decision to launch a criminal case and to take it under his jurisdiction.

This all happened after the EMDS publicised its report on the results of the election held in Azerbaijan in 2013. What a coincidence that until 30 October 2013, the law enforcement agencies of the country had been unaware of the EMDS or how it operated.

It should be noted that there existed none of the grounds or reasons specified in Article 204-209 of the Criminal Procedure Code (CPC) to launch the criminal case. The purpose in launching the criminal case was to punish my client for criticising the presidential election held in the country. Of course, there was nothing illegal in publishing the lawyer vacancy and offering 500 manat as the salary.

The investigative agency aimed to identify the persons cooperating with my clients, to interrogate them through intimidation, to carry out a search and seizure in the office of EMDS as the lawyer vacancy ad lacked elements of a crime, and to collect evidence during the search and seizure in order to file new criminal charges.

As soon as the criminal case was launched, all the information carriers, computers, CDs, papers and notes were seized from the office of Anar Mammadli. Interestingly, those who performed the search did not require anything related to the lawyer vacancy ad, and neither did they tell what documents they were searching for. Because, prior to the search and seizure, they should have told which documents they were searching for and suggested that they be presented voluntarily. The investigative agency aimed to seize all the documents because they would determine the charges against the Applicants, i.e. my clients, based on the evidence that they were going to obtain. Thus, the search and seizure aimed not at collecting evidence within the launched criminal case, but collecting evidence regarding “new” charges, when there was no evidence to launch the criminal case against the Applicants in the first place.

According to Article 242.1 of the CPC, where the available evidence or material discovered in a search operation gives rise to a suspicion that a residential, service or industrial building or other place contains, or certain persons are in possession of objects of potential significance to a case, the investigator may conduct a search.

As we can see, the search and seizure can be conducted for the purpose of obtaining evidence within the launched criminal case. But the purpose of the above-mentioned search was to collect trumped-up and additional incriminating information about the Applicants, to identify the persons cooperating with them, to intimidate them under the pretext of involving in the criminal case and to take statements from them against the Applicants.

At first, Anar was not arrested and he was given a chance to correct his “mistake” regarding the 2013 election. Seeing that Anar did not correct his mistake, the investigative agency had him arrested by an order from the above, although while at liberty, Anar Mammadli had not committed any act or inaction that might serve as a ground to arrest him. His pretrial detention was later upheld and extended, and finally, during its preparatory hearing on the case, the Baku Court of Grave Crimes not only did not end this unlawfulness and change the measure of pretrial detention chosen against Anar Mammadli, but, as if it was not enough, ordered the detention of Bashir Suleymanli as well. And thus, it violated Article 5 of the Convention once again with these actions.

As such, in connection with the said case, an illegal inspection was conducted on Mammadli, Anar Asaf oglu, Volunteers International Cooperation Public Union, and Suleymanli, Bashir at the initiative of the Serious Crimes Investigation Department of the Prosecutor General’s Office of the Republic of Azerbaijan, and with the participation of a representative of the Tax Audit Department under the Ministry of Taxes, Rafail Agayev, a representative of the Ministry of Taxes of the Republic of Azerbaijan, Sabir Mammadov, and the accountant of the Council of State Support to NGOs, Tofig Hasanov, and on 7 February 2014, the inspection was concluded and an illegal inspection report was compiled on the same day. By the said inspection report, an additional VAT of 19535.33 AZN and a financial sanction of 9767.66 AZN were calculated against Mammadli, Anar Asaf oglu.

I bring to your attention that the said tax liability had not arisen, because the received amounts were grant funds and used for the implementation of projects. Those projects were funded under a grant contract by the U.S.-based NDI (National Democratic Institute), no income was derived from the said grant contract, and the project implementers undertook to pay tax from the funds paid to them for the implementation of the project and they paid the relevant tax.

It should be noted that during the first interrogation of Anar Mammadli and the other Applicants, they were asked why they had issued a report that the elections had been conducted through violations of the law, when indeed they had been held in a democratic and legal manner, and they responded to the questions.

It became clear from the testimony of the victim Hasan Hasanov that he worked not for the Volunteers International Cooperation Public Union or EMDS but for the OSCE Baku Office, and he was paid directly by the OSCE Baku Office. According to what he said, he gave the money to EMDS with the purpose of assistance. But his allegation about giving the money to EMDS was completely negated by other evidence. Besides, his allegations made in his statements on behalf of other persons were refuted by those persons themselves. Considering all of this, all of the three persons [defendants] must be acquitted”.

The public prosecutor requested that the cassation appeal be denied and the verdict dated 10 December 2014 of the Baku Appeal Court’s Collegium on Criminal Cases be upheld.

The Supreme Court upheld the decision of the Court of Appeals.

Background: EMDS chairman Anar Mammadli was arrested on 16 December 2013. On 26 May 2014, Mammadli was sentenced to 5.5 years in prison, EMDS Executive Director Bashir Suleymanli to 3.5 years in prison, and the Volunteers International Cooperation Public Union’s director Elnur Mammadov was given a suspended sentence. The human rights defenders were convicted of tax evasion, misappropriation, and other offences.