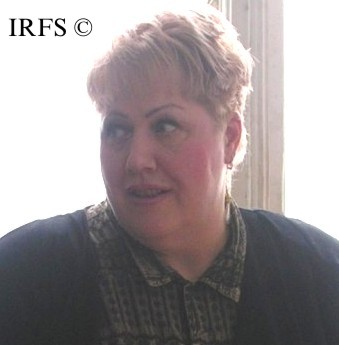 Refugee/IDP Rights Defense Committee Chairperson Tatyana Chaladze is planning to write a book about imprisoned Editor-in-Chief of "Gundelik Azerbaijan" and "Realniy Azerbaijan" newspapers Eynulla Fatullayev.
T.Chaladze told this to the Institute for Reporters’ Freedom and Safety. She stated that few people are aware of the essence of her lawsuit against Eynulla Fatullayev and the fundamental nature of this issue has not been covered objectively in several mass media outlets.  As a result, several foreign organizations recognized Eynulla Fatullayev as the prisoner of conscience, according to T.Chaladze. Saying that she wants to write the book to inform the public of the essence of the issue, Chaladze added that she is planning to use materials taken from the criminal case opened against Fatullayev in the book.
Eynulla Fatullayev expressed opinion about T.Chaladze’s idea. During his phone conversation with his father Emin Fatullayev, E. Fatullayev said that he does not take Chaladze’s opinions seriously and pities this person.
"Gundelik Azerbaijan" and "Realny Azerbaijan" Newspapers' Editor-in-chief Eynulla Fatullayev was sentenced to 2.5 years of imprisonment on 21 April 2007 for insulting honor and dignity.  Later he was convicted under articles 214.1 (threatening terror), 283.2.2 (incitement of ethnic/national, social or religious hatred abusing authority), and 213.2.2 (tax evasion) of the Criminal Code and was sentenced to 8.5 years of imprisonment on 30 October 2007.
Previous Post