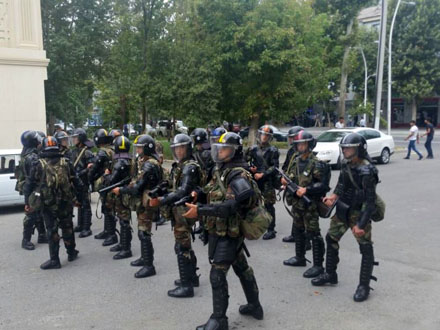 Residents of Zagatala region planned to hold a protest on January 30 against the price increases affecting food and other products. Prior to January 30, the organizers of the protest shared information about the protest on Facebook.

According to a Zagatala resident, who did not wish to be named, 14 people who disseminated information about the protest on Facebook, have been arrested, accused of violating public order and sentenced to 20-25 days of administrative detention by Zagatala regional court.

Two of those arrested have been identified, Sabuhi Nusalov and Vagif Huseynov, both from Zagatala’s Yukhari Tala village. They have been convicted by the local court of violating the public order and are now serving 25 days of administrative detention.

The on-duty unit of Zagatala Regional Police Department claimed that no one has been arrested.

Background: The first two weeks of January saw protests in various regions of the country (Siyazan, Fuzuli, Lankaran, etc.).  The protests were sparked by the prices increases affecting food products and other essential goods, and the workplace closures that followed the devaluation of the national currency in 2015.