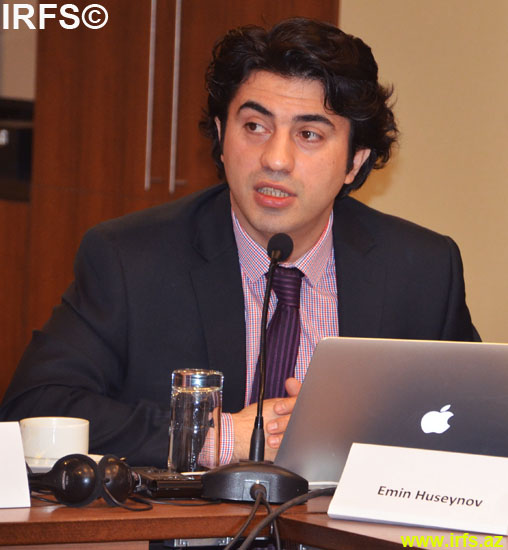 NEW YORK—A leading Azerbaijani journalist and rights defender is asking the European Court of Human Rights to rule that he has been wrongly stripped of his citizenship by Azerbaijan’s increasingly repressive government.

Emin Huseynov, who now lives in exile in Switzerland, is the director and co-founder of the Institute for Reporters’ Freedom and Safety (IRFS), which was set up in 2006 in Azerbaijan’s capital, Baku, to protect press freedom and provide independent online reporting.

His complaint to the European Court of Human Rights (ECHR), filed with the support of lawyers from the Open Society Justice Initiative, arises from events in the summer of 2014, when official repression of government critics in Azerbaijan intensified. This included the arrest of leading human rights advocates Leyla and Arif Yunus, Rasul Jafarov and Intigam Aliyev.

Fearing that he was also facing imminent arrest, Huseynov sought refuge in the Swiss embassy in Baku in August, 2014.

He subsequently spent 10 months in the embassy, mostly confined in a single room of 17 square meters, unable to leave without fear of detention. During much of this time he was largely isolated from contact with friends and family. He was also suffering continuing health problems resulting from physical injuries sustained at the hands of Azerbaijan’s police in 2003 and 2008.

However, prior to his departure, Huseynov was required to declare that he was renouncing his Azerbaijani nationality. On the basis of this declaration, made under duress, Azerbaijan subsequently declared that it had revoked his citizenship. This action rendered Huseynov stateless.

This is not the first time that the Azerbaijani authorities have used forced renunciation of citizenship to silence a dissident. Alikram Hummatov, a former political prisoner, was compelled to renounce his Azerbaijan nationality in 2004.

In his court application, Huseynov asserts that the deprivation of his citizenship violated Article 3 of the European Convention on Human Rights (inhuman or degrading treatment) as well as Article 8 (respect for private life), Article 10 (freedom of expression) and Article 13 (lack of an effective remedy).

Huseynov describes the experience of losing his nationality and becoming a stateless person, and the manner in which it was engineered, as an exercise of demoralization and humiliation:

“In stripping me of my nationality, the government of Azerbaijan intends to portray me falsely as unpatriotic . . . the government aims to prevent me from acting as a journalist, from reporting on political events in my country, and from speaking out on behalf of human rights. This has hurt me deeply and caused me profound emotional distress.”

Laura Bingham, one of the lawyers from the Justice Initiative supporting the case, said:

“Emin Huseynov’s treatment was a clear breach of the European Convention on Human Rights. By arbitrarily stripping his citizenship and making him stateless, Azerbaijan is also in breach of its commitments under the 1961 UN Convention on the Reduction of Statelessness, which forbids rendering anyone stateless by such means and on political grounds. In addition to other remedies sought, his Azerbaijani citizenship must be immediately restored.”

Huseynov’s ordeal is part of an escalating, systematic crackdown on free expression and press freedom. Since his election to a third term in October 2013, President Ilham Aliyev has unleashed an all-out campaign to silence and punish journalists, activists, bloggers, lawyers and opposition figures for their support of human rights and criticism of the regime’s deteriorating  respect for the rule of law.

These actions included launching spurious legal action against Huseynov’s younger brother, Mehman—also a journalist—which has prevented him from travelling, and seizing his identity documents, making him unable to get access to public services.

On 16 December, 2015, the Secretary General of the Council of Europe, Thorbjørn Jagland, initiated an investigation into what he described as “worrisome” developments in Azerbaijan’s human rights record, and the “lack of positive steps to address the situation.”

The Open Society Justice Initiative its part of the Open Society Foundations. Its previous litigation at the European Court of Human Rights has included winning judgments against Poland and Macedonia for cooperating with secret torture and rendition by the United States’ Central Intelligence Agency, and filing more than 25 cases addressing statelessness and discrimination, criminal justice abuse, and freedom of information and expression. This is the first time the Justice Initiative has submitted a complaint at the European Court against Azerbaijan.