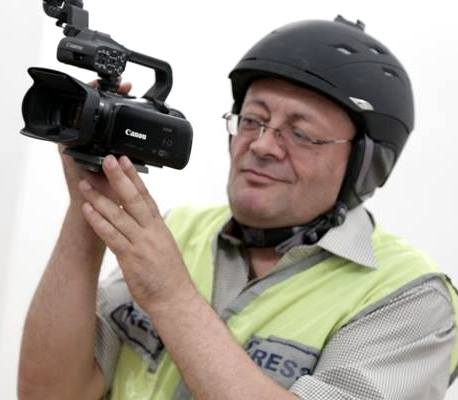 The European Court of Human Rights (ECtHR) has accepted the application of Turan Information Agency and Voice of America reporter Tapdig Farhadoglu for consideration.  Farhadoglu’s lawyer Samira Agayeva reported that she has received a communication from the Court with an assigned case number.

According to Agayeva, the object of the complaint is the failure by law enforcement agencies to investigate an attack on the journalist while he was covering a student protest at Baku State University (BSU) in February 2014. The journalist sustained serious injuries, leaving him unable to work at his previous capacity.  The application is based on alleged violations of Articles 3 (prohibition of torture or inhuman or degrading treatment or punishment), 6 (right to a fair trial) and 10 (freedom of expression) of the European Convention on Human Rights, to which Azerbaijan is a signatory.

Earlier in May, the ECtHR ruled in favour of journalist and human rights defender Emin Huseynov, concerning his complaint of arbitrary detention and ill-treatment by Azerbaijani police. Huseynov was found to have had his human rights breached on four counts, following physical abuse by the police. The court found a breach on Article 3 regarding ill-treatment by police and failure to investigate the applicant’s allegations of ill-treatment, Article 5, where his arrest was found to be unlawful and Article 11, where his rights to freedom of expression were violated.

As one of the targets of the crackdown on free speech and civil society that has taken place in Azerbaijan over the past year, Emin Huseynov was forced to take refuge in the Swiss embassy in August 2014, and remains there today. In absentia, he has been charged under Article 192 (illegal business), 213 (tax evasion) and 308 (abuse of authority) of the Criminal Code, and on 19 August 2014 was announced as wanted by state authorities. He faces arrest upon leaving the Swiss embassy.

Emin Huseynov is the founder and chairman of the Institute for Reporters’ Freedom and Safety (IRFS), which is a leading freedom of expression NGO in Azerbaijan. Another member of IRFS, journalist Eldostu Mehdiyev has similar case pending before the ECtHR. The case in the ECHR argued that Mehdiyev was illegally detained and ill-treated by police in Azerbaijan. The Court is expected to announce a decision on Mehdiyev’s torture claim on June 18.

Background: On February 20 2014, Tapdig Farhadoglu was assaulted from behind and kicked multiple times by BSU Security Chief Mahir Khojatov while filming a student protest. However, Yasamal District Prosecutor’s Office failed to investigate the incident and Yasamal District Court dismissed the complaint on the failure to investigate. The journalist’s complaint was rejected by all domestic courts; having exhausted all domestic remedies he is now seeking relief at the regional level.