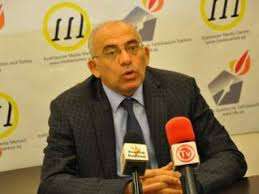 Rahim Hajiyev, the first deputy Editor-in-Chief of the opposition newspaper Azadliq, has been summoned to the Prosecutor General’s Office.

Hajiyev told the Institute for Reporters’ Freedom and Safety (IRFS) that he was summoned to the Prosecutor’s Office in relation to Azadliq’s publication of appeals made by the husband of the late Dr. Natavan Aliyeva, Samir Aliyev, regarding his wife’s murder. Samir Aliyev was arrested on suspicion of killing his ex-wife Natavan Aliyeva. Attached to his latest appeal, sent to Azadliq newspaper, Samir Aliyev also attached the transcript of his dialogue with the investigator. The transcript was published in the newspaper. The first part of the transcript was printed on May 5, 2016, and the second part on May 6, 2016. Following this, Rahim Hajiyev was summoned to the Prosecutor General’s Office.

The Prosecutor General’s Office issued a warning to Rahim Hajiyev regarding these materials.

Despite of the intensive investigative and operational measures regarding the criminal case, about which the public is kept informed, Azadliq newspaper – based on the defendant’s argument that he had acted in self-defense– published the supposed transcript of Samir Aliyev’s dialogue with the lead investigator. Azadliq failed to check the authenticity and legitimacy of the source and did not seek the investigating agency’s views, thereby demonstrating a stance unbecoming to the profession of journalism and resulting in the dissemination of preliminary investigation information, a significant violation of the rights and interests of the close relatives of the murder victim Natavan Aliyeva, and thus, grossly violating the law. Therefore, the first deputy and acting Editor-in-Chief of Azadliq newspaper, Rahim Hajiyev, was invited to the Prosecutor General’s Office and was issued an official warning in accordance with the Law on Prosecution. He was forewarned that dissemination of information undermining the normal course of the preliminary investigation and the rights and liberties of other persons by the newspaper was unacceptable, and that stricter measures prescribed by law, including criminal prosecution, would be taken against him in case of future publication of information of this nature, biased information and/or information contradicting the requirements of the law.”