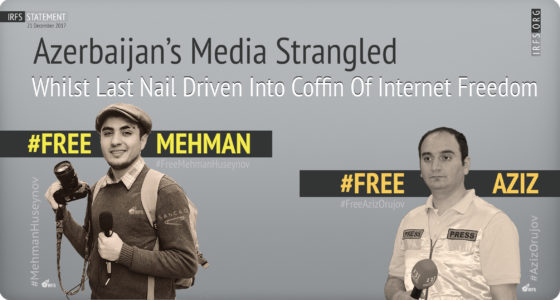 On 15 December, a court in Baku sentenced Aziz Orujov, detained since 2 May, to a six-year imprisonment on politically-motivated charges of power abuse.   On the same day, the Court of Appeal upheld the verdict against IRFS Board Chairman and anti-corruption blogger Mehman Huseynov, who was sentenced by the court of first instance to 2 years in prison on defamation charges on 3 March 2017.

“Demonstrative sentences handed down by courts to the two most eminent representatives of the critical online community on the same day point to the authorities’ intention to step up pressure on the internet environment, especially in the run-up to the 2018 presidential election,” IRFS CEO Emin Huseynov said.

“Having completely destroyed independent television and radio broadcasting and independent print media in previous years, in 2017, the Azerbaijani authorities decided to eliminate dissent on the internet, because it is there that the handful of independent media and critical internet users both inside and outside of the country continue to stand up for their rights to freedom of expression in spite of the progressively intensifying repression. The incarceration of Mehman Huseynov and Aziz Orujov serve not only the goal of weakening the activity of the Sancaq Production platform on Facebook and Instagram and of Kanal13, a successfully developing channel on Youtube, but also intimidating the multi-million audience of Azerbaijani internet users,” Huseynov concluded.

IRFS is alarmed by the first instances of a complete shutdown of both mobile and wired internet services to prevent livestream of the​​ opposition rallies held on 7 and 28 October . Cases of deliberate slowdown of the internet speed throughout Azerbaijan have also increased over the last three months. The concurrence between the deterioration in the quality of internet access and the increased activity of leading opposition forces has been particularly obvious. Along with the new and old methods of blocking the network, the authorities have continued incarcerating the moderators of popular Facebook pages and Youtube channels, as in the case of the administrative arrest of online opposition activist Namig Sadigli, who was detained earlier this month.

In cases where the authorities are unable to persecute online critics living in exile, they target their close relatives, as in the case of Emin Sagiyev, who was arrested on a fabricated charge of drug dealing. Sagiyev is the brother-in-law of journalist Turkel Alisoy, who is popular in the Azerbaijani segment of Youtube.

According to IRFS’ observations, the scope of attacks on critical voices has expanded not only within the country but also beyond its borders. Specifically, blogger Mehman Galandarov, who was arrested in February 2017, died in prison under murky circumstances in April.

Since the beginning of the year, the authorities in Azerbaijan have implemented a score of online censorship measures:

IRFS observes with dismay that, against the backdrop of attacks by the corrupt authoritarian regime on freedom of expression on the internet, the global ICT giants such as Microsoft Google and Facebook are investing in the IT infrastructure of Azerbaijan, placing their regional servers in the country and setting up these servers on the basis of the data centers whose ultimate beneficiaries are high-level corrupt officials or their close relatives.

Starting joint business in the country, where both backbone providers, all three mobile operators and the largest data centers belong to the relatives and close friends of the President of Azerbaijan, the world’s ICT giants not only indirectly contribute to the illegal enrichment of the corrupt officials that systematically violate fundamental human rights, but also infringe both international anti-corruption agreements and the legislation of the leading Western countries where their own headquarters are located.

In view of the ongoing suppression of digital freedoms in Azerbaijan, IRFS calls on private investors to reconsider their plans to build presence in the ICT industry of Azerbaijan. As the first step, the organisation calls on them to refrain from the placement of their servers on the territory of the country.

IRFS encourages international financial institutions to take a similar approach and to not provide financial support for ICT projects related in any way to the ruling elite of Azerbaijan.

IRFS calls on all member states of the UN, the OSCE and the Council of Europe committed to protection of digital freedoms to exert maximum pressure on the authorities and demand that they put an end to the repression against critical voices. IRFS further calls for imposing restrictive sectoral sanctions on the Azerbaijani government agencies to prohibit their provision with equipment and software that allow them to violate and restrict the rights of internet users.

IRFS urges UNESCO to withdraw the status of a goodwill ambassador from the Fist Lady and  First Vice President of Azerbaijan Mehriban Aliyeva, who bears political responsibility for attacks on her critics.

IRFS calls on the governments of Western countries committed to democracy and protection of human rights to start applying individual sanctions that prohibit entry into their territories for and the seizure of foreign assets of the Azerbaijani corrupt officials implicated in repression.

IRFS also calls on the authorities to reconsider the severe and unfounded sentences passed against opposition politicians Fuad Gahramanli and Movsum Samadov, who have actually been sentenced to long prison terms for their political appeals disseminated on Facebook and Youtube and lacked any criminal elements whether extremism or calls for violence and riots.